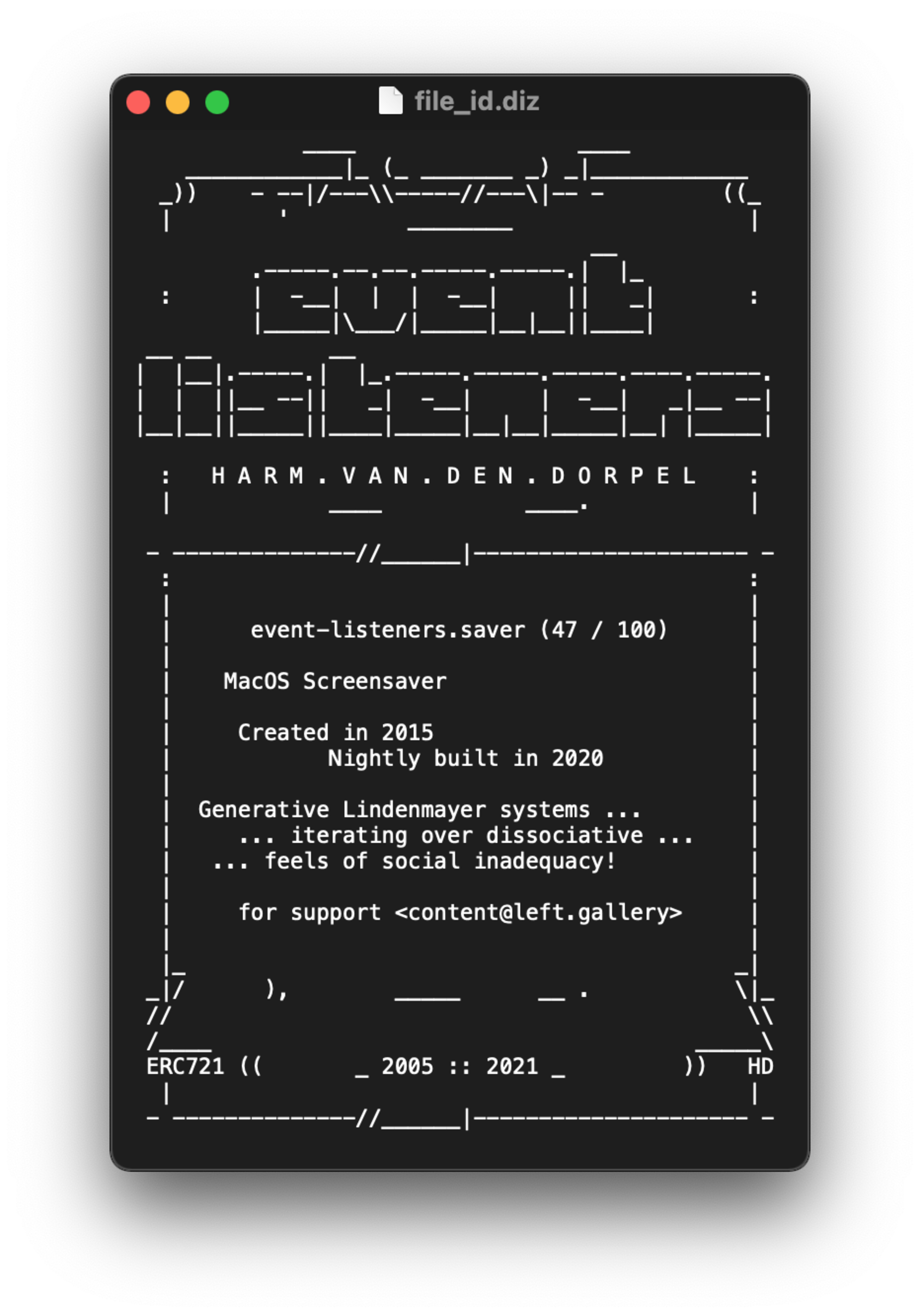 It's fascinating and exciting (and at times demoralizing) to follow the surging interest in NFTs (non-fungible tokens). People have approached me asking for my opinion on them, given that I run left gallery. So, here is my highly personal and entirely subjective take on the matter.

I minted my first NFTs in 2015 with the help of the now defunct ascribe.io. Their pioneering service allowed creators to upload their work, mint editions on the Bitcoin blockchain, and to transfer them as tokens when sold.

Even though, at the time, this sounded like an abstract and intangible fad, the Museum of Applied Arts in Vienna did buy 20 tokenized editions of my work, Event Listeners, through the marketplace Cointemporary. The Museum paid with Bitcoin, which made it a historical transaction: it was the first time a museum bought NFTs, and paid with a cryptocurrency. The event gained quite some media attention, and, gradually, all my 100 editions were sold to collectors and another museum.

This unexpected success inspired my partner, Paloma Rodríguez Carrington, and me to start our own marketplace for blockchain ascribed artworks: left gallery. We would sell "downloadable objects'' in large editions for low prices. Customers could pay with crypto, PayPal, or credit card, and, after purchase, we would manually transfer the token belonging to their purchase to those clients interested in having them – most didn't understand what a blockchain was at all.

The insights of ascribe.io were radical and definitely ahead of their time. Unfortunately, the state of blockchain technology then was not mature enough to support their business model; ascribe stopped offering their service around 2017, and they pivoted to become a database company.

Although the token provenance information that ascribe stored on the immutable Bitcoin blockchain will always remain there, in practice, we have lost access to it, as their web interface to retrieve it was discontinued. So, in 2018, I bit the bullet, deployed an ERC721 smart contract and minted Ethereum tokens for the editions that had been sold. I asked owners to send me their Ethereum wallet address in order to transfer them the tokens for the editions they owned. This was, in itself, an "interesting" situation, because this meant that some editions were now tokenized on two blockchains at once.

To my disappointment, when I announced this new Ethereum website integration, few buyers actually requested the token belonging to their purchase. Sales on left gallery continued, but interest in ERC721 tokens kept declining among our clientele. At the same time, the transaction costs kept increasing, to a degree where the costs for minting and transferring tokens exceeded the sales price of the actual artworks by orders of magnitude.

Then came COVID19. The income of my partner and I dropped significantly, as we had fewer clients and the art market was on hold. This unusual moment created the opportunity to redevelop the left gallery website (from scratch) using new technology, and support ourselves and other artists by increasing gallery revenue.

As only a few buyers in the previous years had shown interest in owning an NFT for their purchase, I hesitated to implement an integration with the Ethereum blockchain again. This meant that left gallery now became a regular online marketplace where ownership records were stored in a regular database. I was proud of what we had achieved with the left gallery relaunch, and I was amazed by all the works that artists offered on it, but also it hurt, because left gallery had lost some of its "blockchain soul".

To my surprise a renewed interest in NFTs emerged in the first quarter of 2021, which, to be honest, initially annoyed me. In my humble opinion, the works now offered as NFTs were not very interesting, or just plain ugly. Why were people suddenly willing to pay so much Ether for such bad "art", while they often hesitated to pay for the affordable, non-NFT artworks on left gallery? It seemed to me this hype surrounding NFTs was not grounded in a genuine appreciation of the artworks.

Still, the rush toward NFTs turned out to be an opportunity for me as well, as I had some old, and newer, artworks that never found their ways to art collectors, but which suddenly very well fitted the editioning, format, and price range of NFTs. So I did profit from this second(?) wave of NFT. However, as the general interest in NFTs has grown explosively, so did questions about its environmental impact.

I find it hard to judge exactly how wasteful the Ethereum blockchain is, and how, in relative terms, environmentally destructive it is compared to, for example, the Google data centres that power our daily search queries, or CI/CD pipelines, or credit card payment networks, etc. I wonder why the preponderance of general opinion questions their use of electricity much less than that of NFTs. Many people lack a deep technical understanding of computing: they do not realise that there are many other (non-NFT) smart contracts running on the same blockchain, and the popularity of NFTs does not correlate to the general energy use of the validators. Were all artists to abandon Ethereum en masse, it would not make our planet greener.

However, I think that it’s hard to deny that the current Ethereum blockchain is wasteful by design. The "proof-of-work" (PoW) consensus algorithm ingests huge amounts of electricity to crunch meaningless mathematical riddles, which secure the network from fraudulent transactions. Additionally, PoW is limited in the amount of transactions it can process per second, and transaction costs can become ridiculously high.

These limitations have been known since the inception of the Ethereum blockchain, and its developer community has already gone a long way in replacing the PoW algorithm with another algorithm: proof-of-stake (PoS). I will spare readers my attempts to explain how these two algorithms differ technically, but the takeaway is that PoS does not depend on computing power to solve random math puzzles, and, therefore, burns far less electricity than PoW. A blockchain running on a PoS algorithm can handle many more transactions in a given amount of time; transaction costs might be low, or even zero. Even though PoS is not a silver bullet, it is my understanding that abandoning PoW in favour of PoS will improve on the environmental issues associated with NFTs.

The Ethereum website promises to complete the transition to proof-of-stake in 2022, which will "signal the end of energy-intensive mining". This is hopeful, but how can we be sure they will meet this deadline? Are there feasible alternatives?

We will eventually find out if the current renewed enthusiasm for NFTs will stabilise and form a sustainable market that will benefit artists over the long term. Practically, I will continue to use the Ethereum blockchain for selected artworks, in anticipation of the announced transition to the environmentally more sustainable PoS algorithm, while simultaneously developing our own light-weight blockchain.